How to Compare Weight Savings to Horsepower Gains 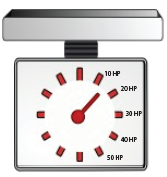 Maybe you’ve wondered how removing 100lbs will affect your car in terms of how much horsepower you’d have to gain to accomplish the same thing.

These questions are wise to ask because they can be used to make significantly better modification choices and frankly it can be fun to “simulate” different modification scenarios.

For example, if I could buy a carbon fiber hood that weighs 20lbs less than factory, it’d be nice to be able to view that weight loss in terms of horsepower. In other words, how many horsepower would I need to gain in order to accomplish the same thing as losing 20lbs? (Hint: it’s pathetically little)

What if I wanted to determine if a dual exhaust system is worth while? How much more power would I have to make to offset the extra 20lbs? (in a 3500lb car with 215 hp, not even 1.25hp, so probably do-able)

What about if I wanted to see how much weight I’d have to lose to compete with the same car with 50 extra horsepower?

All of these kinds of questions can be answered with the simple math in today’s article.

You’ve probably heard power-to-weight more than weight to power, they’re the same thing but one has nicer numbers and a better visual representation so I’ll be using weight to power for this discussion.

To give you a really over simplified visual, imagine that each “horsepower” is a horse. The fewer pounds the horse has to drag with it, the easier it is for it to run.

The Bugatti Veyron with 987 bhp and a curb weight of 4,162 lb has only 4.12 lbs/hp and thus is significantly faster than our example car.

Great, that’s all very simple. So how is this useful beyond comparing vehicles to one another?

Well, let’s go back to the 3500 lb car with 215 horsepower example. Let’s say I want to know how losing 100lbs would translate into horsepower gained, because let’s face it, most of us think in terms of horsepower gains.

So we take 3500 lbs (the original weight) and divide by 215 to get 16.28 again (rounding for simplicity, you’ll want to use the full number to get accurate results).

We take 3400 lbs (the new weight) and divide by 215 to get 15.81 lbs/hp. That is better of course, but what would that mean in terms of horsepower? Well, we do some simple Algebra to see what horsepower we’d have to have with the original weight to get the same weight-to-power. Stick with me as this is really cool/useful:

So that means that by taking 100lbs out of the 3500lb car, we would have had to gain ~ 6.38 hp (221.38-215, (the new-original horsepower) to accomplish the same thing WITHOUT taking out the 100lbs. Thus in this situation, 100lbs is roughly the same as if we had done something to gain 6.38hp. So to some extent, this means that something like an intake that adds +6hp would FEEL kind of like losing 100lbs (or a very skinny passenger) in this particular vehicle. In another car with different weight and power numbers, this figure would be different but calculated in the same way.

You can also use this same method to determine how adding weight is hurting you in terms of theoretical power loss. So if I add 50lbs of stereo equipment to the same car, it’s

So that 50lbs of equipment is LIKE losing a little under 6 hp as those horses will now be dedicated to hauling that 50lbs.

This will give you a new way to think about weight and power. You can also go the other way and see how power gained changes the car in theoretical terms of weight, though I find this less useful. To do that, you say a 3500 lb car with 215 horsepower has a 16.28 lb/hp power-to-weight, and let’s say we gained 50hp to get up to 265 hp. That’s a power-to-weight of 13.2 lbs/hp. Now it’s simple Algebra again to figure out how much weight I’d have to lose off the car to make up the same amount of power:

So 50 horsepower in this particular vehicle would be roughly the same as shaving off 662 lbs. As you can see from this math, this is why losing weight is rarely as useful as gaining horsepower, or at least, horsepower gain is significantly more practical and cost effective than weight loss in a production car.

Of course, this is also if we only take into consideration the acceleration effects of weight and power. In road racing or in a daily driver, weight loss is more useful than in drag racing. Of course, regardless of our goals, the least amount of weight necessary is best.

Previous: Keep Your Engine Alive: The Importance of Oil Temperature
Next: What’s So Wrong With Nitrous?